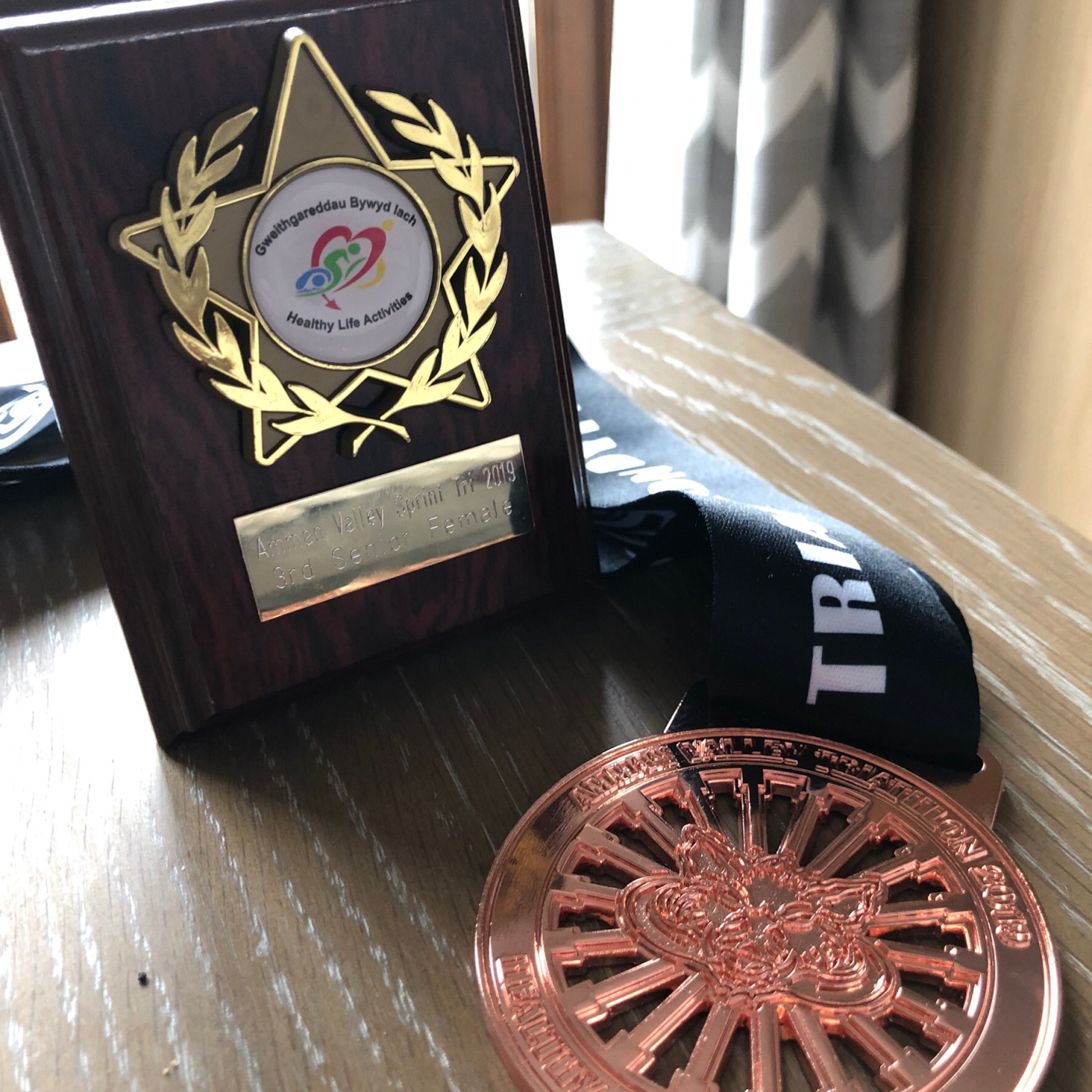 I wouldn’t normally enter a sprint event anymore. I enjoy “plodding” much more than running quickly. I also tend to get injured when I try to run quickly, which for me is anything sub 7.30min/mile. I had entered another of the Healthy Life Activities’ events last year, Sospan Sizzler, which was unfortunately cancelled due to bad weather. Instead of deferring to this year’s Sospan Sizzler (a middle distance event) I chose to do two smaller events instead. The timing of this meant it would be a good sharpener for Mallorca 70.3. As such it was a “C” race for me, a training event with no taper in the week leading up to it.

We all had to enter out predicted 400m swim times when we registered for the event and about a week before hand we were given start times based on these. Although the event started about 7am my start wasn’t until 10.10am. An extra bonus was that transition was “open” throughout the morning so I could rack whenever I arrived, no need to rack before the first swimmers started at 7am. A few extra hours in bed is always a bonus!

David and Roger came with me as my spectators. It was a cold morning, they were probably glad it was only a sprint event. Registration was straight forward and I was told that the event was running half an hour ahead of schedule, so I could start half an hour ahead of my swim time if I wanted to. I decided against this as I preferred to wait until swimmers of the same ability as myself had started so that I wasn’t holding anyone up in my lane, or being held up by slower swimmers.

Racking also went smoothly and it was nice to see the familiar faces of Dylan and Claire of Cycle Specific volunteering in transition. I placed my bike right next to bike exit, easy to find and less time running with the bike.

Soon enough I was joining the queue on the side of the pool, chatting to others in the queue. For the guy next to me this was his first ever Triathlon. He was anxious that the other men looked like pros and that he was the only one in swimming shorts, no tri-suit. I urged him not to worry and just because someone had “all the gear” it did not mean they were better athletes. I’m sure we’ve all seen the “all the gear no idea” athletes in many sports.

Three of us soon realised we would be the three sharing a lane and talk turned to our 400m swim times. We were all aiming for about the seven minute mark. I was in the middle of the three. The pace for the first 100m was rapid. I was flagging behind the guy in front, no chance of drafting and the guy behind (the newbie) was almost tickling my toes. 1.36 for the first 100m. I kept going and all of a sudden I was seeing bubbles, the swimmer in front of me had slowed drastically. I swam to his toes and briefly considered staying there and drafting him but he had slowed so much I went straight past. By the end I had made quite a gap on the other two. I’m glad I stuck to my own pace for the first 100m and hadn’t tried to keep their pace.

I carefully made my way out of the slippery swimming pool and down the steps to my bike. David asked whether I’d managed a 6.50 swim. 6.54 I replied, delighted with a solo sub 7. T1 went smoothly and I carefully made my way down a down hill section in my cleats to the mount line. Big thank you to the martial who reminded me to lap my watch as I clipped into my pedals.

The bike route is more or less an out and back and it started straight into a headwind and a slight incline. I had hoped to hold about 17-18mph for the 10 mile bike but the conditions meant I was only averaging about 15mph on the turnaround point. It was a good road to choose for the event because even though there was traffic on the road it was fairly wide with plenty of room for cars to overtake.

Unsurprisingly I really enjoyed the second half of the bike course with the tailwind and downhill sections. Got the speed up to 18.5mph average at its most and I think 18.2mph by the time I had made it back to the mount line through the residential section. Happy with that. Saw David and Roger towards the end of the bike and Roger called over that I was “on target”. With the staggered race start you cannot race against other athletes per se, but I did have target times for every discipline that I had discussed with them both in the car on the way up.

Running through transition and my recurring hamstring injury reared its head. Gutted, I was concerned, the run hadn’t even started yet! I got back to my spot and three Welsh Triathlon officials were standing in my way chatting!! A firm “excuse me” and I racked my bike. As I changed shoes Claire, who was one of the marshals, leant over and pointed me in the direction of run exit. She had correctly predicted that I was about to try and run out of the bike exit! Thanks Claire!

1st mile went slowly, although the hamstring pain had eased I was cautious and felt my stride was very short compared to usual.

As the miles went on though I eased into it with every mile quicker than the last. 8min/mile average overall was slightly disappointing but I was still happy overall. I had done a fair bit of running in training that week and I hadn’t done much fast run training, my main events being a 70.3 and full Ironman this year.

It was a really nice surprise when I heard my name being called at the presentation as the 3rd open female.

I must praise Healthy Life Activities for putting on another successful event. It had something for everyone – whether it was your 1st or 100th Triathlon. It ran smoothly despite the open transition, staggered start and windy and cold morning. Healthy Life Activities arrange a number of events in the Carmarthenshire area all of which are consistently well organised and friendly. The team are extremely experienced having arranged over 130 events over the last 18 years. The communication before the events are second to none. If an event is cancelled, like Sospan Sizzler last year, we were offered a large number of alternative options.

Healthy Life Activities do not make a profit from running these event with all of the profits made being given back to the community. Since 2011 they have raised £92,627 for various local charitable causes and local organisations. Last year (2018) they shared £17,500 between groups such as Celtic Tri Juniors, Johnstown Girls Football Team, Amman Valley Paddlers, RNLI Burry Port to name a few!

This company genuinely care for every athlete, wanting them to have the best event possible. Unlike other companies their aim is not to try to cram as many athletes out onto the course to maximise profits! They take great pride in organising events from the perspective of the athlete. I cannot recommend these events enough. You can check out their website here for their other upcoming events. Be quick, as they normally sell out.

Diolch Noelwyn, Sharon and the rest of the team, along with all the marshals and Cycle Specific for a great morning. Not forgetting my spectators and photographers, David & Roger!